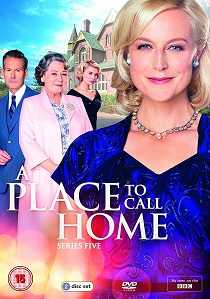 Filled with scandalous secrets, family drama and romance, Australia's multi award-winning A Place To Call Home returns for series five and arrives on DVD, alongside A Place To Call Home: Complete Series One to Five Box Set courtesy of Acorn Media International on 2nd April 2018, following its run on BBC One.

Featuring Jack Irish favourite Marta Dusseldorp in the lead role and set against the sweeping backdrop of 1950s Australia, A Place To Call Home tells the story of nurse Sarah Adams, a woman with a mysterious past, who returns to Australia after 20 years abroad. An encounter on her voyage home ties her to the Blighs, a wealthy pastoralist family living in New South Wales who have some secrets of their own. The series stars a stellar cast including Noni Hazlehurst, Brett Climo, Craig Hall, Abby Earl and David Barry.

Four years after we first met the Bligh family, series five finds their estate, Ash Park, in danger. It's 1958 and the malicious Sir Richard Bennett's involvement in their financial affairs puts their ownership at risk. Could Regina be their only hope of salvation or can't they trust anyone to help save their home?