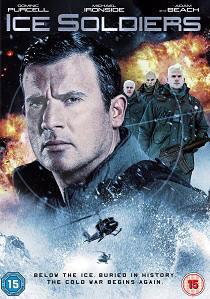 A new kind of Cold War begins in the sci-fi action thriller Ice Soldiers, unleashing on 5th May 2014 on Blu-ray, DVD and Digital from Sony Pictures Home Entertainment.

Dominic Purcell (TV's Prison Break, Blade Trinity), Adam Beach (Cowboys & Aliens, Flags of Our Fathers) and Michael Ironside (X-Men: First Class, Terminator Salvation) lead a hard-hitting cast in this gritty, militaristic adventure about a scientific expedition that unearths three genetically engineered Russian super soldiers frozen in ice since the height of the Cold War. Now the team must stop the killing machines at all costs or risk the total destruction of the Western world.

Buried beneath the Arctic ice since the Cold War, genetically modified Soviet soldiers have been rediscovered, reactivated and are ready to unleash devastating destruction. They are cold-blooded killing machines with super-human strength and one man, a scientist who has been searching for them his entire life, will try to stop the carnage before they complete their terrifying, top-secret mission. Dominic Purcell (TV's Prison Break), Michael Ironside (X-Men: First Class) and Adam Beach (Cowboys & Aliens) star in this pulse-pounding, action-packed thriller.

HotDVDBDTVBoxset
After the defeat of Eobard Thawne and his equally nefarious Legion of Doom, the Legends face a new existential threat created by their actions at the end of last season as DC Legends Of Tomorrow: Season 3 arrives on DVD and Blu-ray 24th September 2018 from Warner ... END_OF_DOCUMENT_TOKEN_TO_BE_REPLACED
Comments
Hot Pick

HotDVDBD
From the producers of Nobody and John Wick comes a bare-knuckle, coal-dark holiday action-comedy that says you should always bet on red as Violent Night sledges in on DVD and Blu-ray 6th March 2023 from Warner Home Video. END_OF_DOCUMENT_TOKEN_TO_BE_REPLACED
Top PicksView