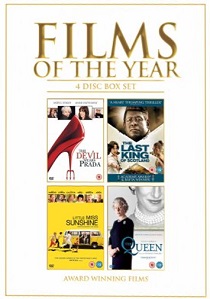 Films Of The Year

News
News Article Go back to homepage
Twentieth Century Fox Home Entertainment is proud to present the Films Of The Year 4 disc DVD box-set, a collection of four critically-acclaimed and award-winning films including The Queen, The Last King Of Scotland, The Devil Wears Prada and Little Miss Sunshine.
Twentieth Century Fox Home Entertainment
7 hours 8 minutes
05/11/2007
Thank you for supporting DVD365.net when you order using the link(s) below. As an Amazon Associate we earn from qualifying purchases
Buy DVD
Information

Twentieth Century Fox Home Entertainment is proud to present the Films Of The Year 4 disc DVD box-set, a collection of four critically-acclaimed and award-winning films including The Queen, The Last King Of Scotland, The Devil Wears Prada and Little Miss Sunshine. Add these stunning films to your collection, complete with original special features - the perfect gift for everyone this Christmas!

When news of the death of Princess Diana breaks upon a shocked and disbelieving British public, HRH Queen Elizabeth II retreats behind the walls of Balmoral Castle with her family, unable to comprehend the public response to the tragedy. For Tony Blair, the popular and newly elected Prime Minister, the people's need for reassurance and support from their leaders is palpable. As the unprecedented outpouring of emotion grows ever stronger, Blair must find a way to reconnect the beloved Queen with the British public. Dame Helen Mirren won both an Academy Award®, a BAFTA Award® and a Golden Globe® for her role as Queen Elizabeth.

The Last King Of Scotland

This is Idi Amin's extraordinary story as seen through the eyes of Nicholas Garrigan (James McAvoy), a young Scotsman who becomes his personal physician, due in part to Amin's unexpected passion for Scottish culture. Seduced by the volatile leader's charisma and blinded by decadence, Garrigan's dream life becomes a waking nightmare of betrayal and madness from which there is no escape. The film won an Academy Award® for Forest Whittaker's incredible performance as Idi Amin, as well as three BAFTA Awards® and a Golden Globe®.

Based on the hilarious best-selling novel, this sinfully funny movie won a Golden Globe for Best Actress and was nominated for two Academy Awards® and five BAFTA Awards®. An assistant to an impossibly demanding New York fashion magazine editor Miranda Priestly (Meryl Streep), young Andy Sachs (Anne Hathaway) has landed a job that "a million girls would die for". However, her heaven-sent appointment as Miranda's personal whipping girl doesn't quite turn out to be the dream start in journalism she anticipated.

Take a hilarious ride with the Hoovers, one of the most endearingly fractured families in comedy history. Father Richard (Greg Kinnear) is desperately trying to sell his motivational success program...with no success. Meanwhile, mum Sheryl (Toni Collette) lends support to her eccentric family, including her depressed brother (Steve Carell), seven-year-old daughter Olive (Abigail Breslin), and son Dwayne (Paul Dano), a Nietzsche-reading teen who has taken a vow of silence. Topping off the family is the foul-mouthed grandfather (Alan Arkin). When Olive is invited to compete in the "Little Miss Sunshine" pageant in far-off California, the family piles into their rusted-out VW bus to rally behind her with riotously funny results. Among its many accolades, the film won two BAFTA Awards® as well as two Oscars® for Best Original Screenplay and Best Supporting Actor.