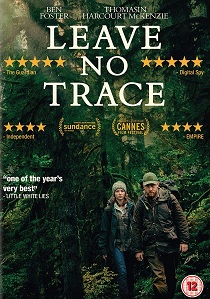 NewsDrama
News Article Go back to homepage
Based on the novel by Peter Rock, a man and his teenage daughter have been living in the wilderness for years in the unforgettable film Leave No Trace, arriving Blu-ray and DVD 5th November 2018 from Universal Pictures (UK).
Ben Foster, Thomasin Harcourt McKenzie, Jeff Kober, Dale Dickey, Isaiah Stone
Debra Granik
Anne Harrison, Linda Reisman, Anne Rosellini
Universal Pictures (UK)
1 hour 49 minutes
05/11/2018
#LeaveNoTrace
Thank you for supporting DVD365.net when you order using the link(s) below. As an Amazon Associate we earn from qualifying purchases
Buy DVD
Buy BD
Information

A man and his teenage daughter have been living in the wilderness for years in the unforgettable film Leave No Trace, arriving Blu-ray and DVD 5th November 2018 from Universal Pictures (UK).

Based on the novel My Abandonment by Peter Rock and from the producers of The Danish Girl Anne Harrison and Linda Reisman, the film is an incredibly powerful story encouraging viewers to explore the idea of family and the notion of 'home'. Critics are calling Leave No Trace "a deeply affecting story" (Manohla Dargis, The New York Times) that "leaves its traces everywhere: in your mind, in your heart, in your soul" (Kenneth Turan, Los Angeles Times).

Directed by Academy Award® nominee Debra Granik (Winter's Bone) from a script adapted by Granik and Academy-Award® nominated writer Anne Rosellini (Winter's Bone), Leave No Trace takes audiences into the lives of war veteran Will (Ben Foster; Hell or High Water) and his teenage daughter Tom (Thomasin Harcourt McKenzie; The Hobbit) who have lived off the grid for years in the forests of Portland, Oregon. When their idyllic life is shattered, both are put into social services.

After clashing with their new surroundings, Will and Tom set off on a harrowing journey back to their wild homeland.

HotDVDTV
Featuring every episode of the entire series in an 8-disc box set, the hilarious BBC comedy Keeping Up Appearances is released on DVD 28th November 2022 ... END_OF_DOCUMENT_TOKEN_TO_BE_REPLACED
Top PicksView