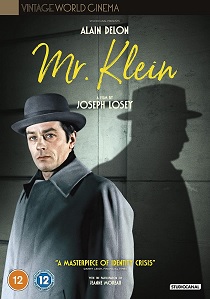 Mr. Klein, with its Kafkaesque focus on the themes of identity and obsession, has become a classic of the doppelgänger paranoia genre and is one of Losey's darkest films.

Paris, January 1942 - art dealer Robert Klein (Alain Delon) is making a killing. For this loyal Frenchman the Nazi occupation is a unique business opportunity. He stands to profit from the Jewish people's misfortune, as they sell their possessions in a hurry to leave the country.

But when a Jewish newspaper turns up on Klein's doorstep, his comfortable life begins to unravel. It seems there is another Robert Klein, a suspected Jewish Resistance fighter, who is content to live in the shadows and let his namesake take the fall.

As Klein's investigation of his double progresses, the mood shifts from Hitchcock to Kafka and proving his innocence becomes less important than confronting his doppelgänger...

This brand-new restoration of the César Award-winning political thriller directed by Joseph Losey stars Alain Delon in a career defining role with a special appearance from Jeanne Moreau.

UHD
The end of the line is only the beginning in a wild, non-stop thrill ride through modern-day Japan as Bullet Train is released on DVD, Blu-ray and 4K UHD 24th October 2022 from Sony Pictures Home Entertainment END_OF_DOCUMENT_TOKEN_TO_BE_REPLACED
Top PicksView