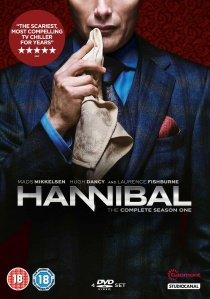 StudioCanal are pleased to bring you the UK premiere of Bryan Fuller's new critically acclaimed series Hannibal The Complete Series One coming to DVD and Blu-ray 2nd September 2013, with the artful direction of David Slade (Twilight: Eclipse, 30 Days of Night). Bryan Fuller is the creative force behind imaginative television such as Pushing Daisies, Wonderfalls and Dead Like Me, and the upcoming Warner Bros. movie Pinnochio. He now brings the classic character Hannibal Lecter to television!

Before Silence of the Lambs and Red Dragon, Hannibal Lecter was a brilliant psychiatrist in the employ of the FBI. His task: to help an unusually gifted criminal profiler, Will Graham, who is haunted by his ability to see into the minds of serial killers.

After a particularly gruelling case hunting a serial killer known as the Minnesota Shrike, Will Graham (Hugh Dancy: Black Hawk Down) threatens to walk away. Jack Crawford (Laurence Fishburne: Matrix), the head of the FBI's Behavioral Science Unit, desperately needs Will on his team to break the tough cases, so he enlists Dr. Hannibal Lecter (Mads Mikkelsen: The Hunt), to ensure Will's mental well-being. Unbeknownst to Will, Hannibal also has a particular insight into these horrible crimes and the psychopaths who commit them. As Will hunts down brutal killers, he is unknowingly sitting across from the most gifted killer of them all.