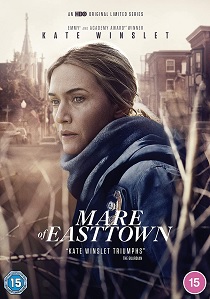 An HBO limited series focused on family and community, Mare of Easttown stars Kate Winslet as Mare Sheehan, a respected small-town Pennsylvania detective investigating a brutal local murder while also balancing her own personal life, which is rapidly falling apart around her.

Considered a local hero for a game-clinching jump shot on her high school basketball team, Mare is the sole detective on her police force, which spends most of its time handling drug-related offenses. Behind the scenes, Mare is dealing with the unaddressed loss of her son, running a busy household filled with her mother, teenage daughter, and grandson, and an ex-husband who lives a stone's throw away with his new fiance.

As pressure mounts to solve a missing person's case growing increasingly cold, the murder of a teen girl finds Mare obsessed with bringing the killer to justice in a town where everyone is a potential suspect.

Mare of Easttown is released on DVD and Blu-ray 13th September 2021 from Warner Home Video.