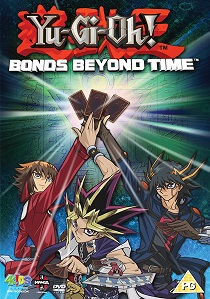 To celebrate the 10th Anniversary of the world's most popular trading card game and the hit animated TV series, duellists Yugi, Jaden and Yusei return to the big screen for the brand-new, sensational eye-popping 3D movie feature, Yu-Gi-Oh! 3D: Bonds Beyond Time, released on DVD and as a dual 3D ready and 2D presentation Blu-ray by Manga Entertainment on 25th July 2011.

Marking the first time a Japanese animated movie has ever had UK 3D theatrical release, Yu-Gi-Oh! 3D: Bonds Beyond Time will be released by Manga Entertainment in association with City Screen Picturehouse and will be presented in stunning digital 3D at 15 screens across the UK on Saturday, 14th May 2011, with additional screenings scheduled for Saturday, 21st and 28th May 2011. As a special bonus for Yu-Gi-Oh! fans, all ticket holders will receive a free, strictly limited, ultra-rare Yu-Gi-Oh! collectable trading card.

Directed by Kenichi Takeshita (Ghost In The Shell: Stand Alone Complex), the release of this latest Yu-Gi-Oh! adventure promises to be one of the year's major events, not only for fans of the franchise but also for all UK anime fans.

In the future, the world has taken a turn for the worse. Civilization is on the brink of extinction and all hope of a brighter tomorrow has been cloaked with dark uncertainty. One man, however, thinks he can do something about it. With his world crumbling into chaos, a maniacal masked menace known as Paradox figures out a way to travel through time so that he can eliminate the scourge that he believes is responsible for causing his world to decay - the Duel Monsters card game! Paradox, determined to eradicate this perilous threat from the annals of time, begins rewriting the future by erasing the game - one card at a time.

But standing in his way are three legendary duelists who will do whatever it takes to save what's on the line - their friends, their family and the game they love. For the first time ever, Yugi, Jaden and Yusei will team together and battle with all their hearts in a duel that will decide the past, the present and the future!

Fans who pre-order or pick up a copy of the DVD or Blu-ray in-store will find a bonus, strictly limited "Super Rare" collectable Yu-Gi-Oh! trading card exclusive to this release. For the first time ever for a commercial Yu-Gi-Oh! UK home video release, both the DVD and Blu-ray releases will include the excellent English language dub of the movie, featuring all of the fan's favourite voice actors, as well as the original Japanese language version with English subtitles.