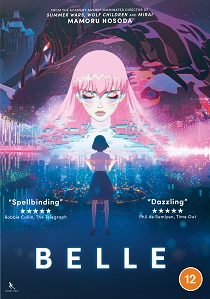 NewsAnimationDramaAdventureWorld CinemaMamoru Hosoda
News Article Go back to homepage
Get ready to log into the world of 'U' and discover your true self from the comfort of your own home as Mamoru Hosoda's critically acclaimed coming-of-age anime, Belle, arrives on Blu-ray, DVD and limited edition 4K UHD on 27th June 2022 from Anime Ltd.
Kaho Nakamura, Ryô Narita, Shôta Sometani, Tina Tamashiro, Lilas Ikuta, Ryôko Moriyama
Mamoru Hosoda
Genki Kawamura, Yûichirô Saitô, Nozomu Takahashi
Anime Ltd
2 hours 4 minutes
27/06/2022
#Belle
Thank you for supporting DVD365.net when you order using the link(s) below. As a member of the Zavvi affiliate program we earn from qualifying purchases
Buy DVD
Buy BD
Buy UHD
Information

Get ready to log into the world of 'U' and discover your true self from the comfort of your own home! Anime Limited are delighted to announce that Belle, the latest anime sensation from Oscar®-nominated director Mamoru Hosoda (Wolf Children, Mirai) will be released on DVD, Blu-ray, as well as a special feature-packed 4K UHD Blu-ray Collector's Edition that includes the film's beloved soundtrack on 27th June 2022.

An original story inspired by the realisation that his own children will grow up in an increasingly online age, Hosoda's Belle is the story of Suzu, a country girl who becomes a music sensation in the virtual world of "U" with the mesmerising avatar Belle. When her fame attracts the attention of a fearsome yet mysterious user known only as "Dragon", Suzu will discover where the line between the online and offline self really lies.

Belle is a truly international achievement that gathers top talent from across the globe under the helm of Mamoru Hosoda, who is widely regarded as "one of the finest directors working in animation today" (Jade King, TheGamer). Animated by Japan's Studio Chizu, the film features character designs from Jin Kim (Disney's Frozen, Moana), gorgeous artwork from the Oscar®-nominated team of Tomm Moore and Ross Stewart (Cartoon Saloon's Wolfwalkers, Song of the Sea), and the feature film debut of acclaimed video game composer Ludvig Forssell (Kojima Productions' Death Stranding), crafting "a soundtrack that will stir your soul" (SciFiNow).

You'll soon be able to put your home cinema system through its paces as you listen to Belle's incredible pop performances at home with the film coming to Blu-ray and DVD from 27th June 2022. The film will also be available on 4K UHD Blu-ray as part of a Zavvi and Anime Limited web store exclusive Deluxe Edition, which will not only include the film on both 4K UHD and Blu-ray, but is also packed with bonus content: an additional Blu-ray disc with over 2-hours of extras, a CD of the film's acclaimed Japanese-language soundtrack, a 60 page booklet, 16 double-sided art cards, and an A3 recreation of the UK theatrical poster all housed together in rigid collector's packaging.

Premiering to a historic 14-minute standing ovation at the 74th Cannes Film Festival, Belle released in cinemas across the UK and Ireland in February to critical acclaim, with the film being called "spellbinding" (Robbie Collin, Telegraph), and "set to become a modern animated classic" (Gavin Spoors, Filmhounds). Belle has become Hosoda's highest-grossing film ever, joining the UK Top 10 for highest grossing original anime, and earning over 6.54 billion yen at the Japanese box office.

From the celebrated Oscar®-nominated director Mamoru Hosoda and Studio Chizu, creator of Mirai, Wolf Children, Summer Wars, and more, comes a fantastical, yet beautiful and contemporary thematic story of one girl's growth in the age of social media. Suzu is a 17-year-old high school student living in a rural village with her father. For years, she has only been a shadow of herself.

One day, she enters "U", a virtual world of 5 billion members on the Internet. There, she is not Suzu anymore but Belle, a world-famous singer. She soon meets with a mysterious creature. Together, they embark on a journey of adventures, challenges and love, in their quest to become who they truly are.