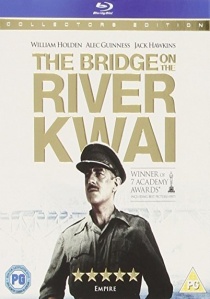 Sony Pictures Home Entertainment have announced that the Blu-rayT release of the masterful 1957 epic World War II film, The Bridge on the River Kwai, restored and newly remastered for high definition, will debut on 6th June 2011.

The winner of seven Academy Awards®, including Best Picture, Best Director, Best Cinematography and Best Screenplay, The Bridge on the River Kwai continues to be one of the most memorable cinematic experiences of all time. Now, for the first time on Blu-ray, following an extensive 4K restoration from the original negative, with newly remastered 5.1 audio, audiences can experience David Lean's masterpiece as never before.

The Blu-rayT Edition of The Bridge on the River Kwai includes all-new special Blu-rayT exclusive special features which illustrate the scope of this epic motion picture, from its inception and premiere to its impact on audiences the world over. Produced by Sam Spiegel (On the Waterfront, Lawrence of Arabia), The Bridge on the River Kwai was an historic undertaking, with location filming in Sri Lanka capturing a sense of both the beauty and remoteness of its jungle setting.

The Bridge on the River Kwai Synopsis

When British POWs build a vital railway bridge in enemy-occupied Burma, Allied commanders are assigned to destroy it in David Lean's World War II adventure The Bridge on the River Kwai. William Holden plays the cynical and opportunistic American prisoner of war Shears, and Alec Guinness is the captured British officer Colonel Nicholson, who refuses to abandon his ideals even in the harshest of conditions. Sessue Hayakawa (nominated for Best Actor in a Supporting Role) is the Japanese Commander who struggles to maintain control in the face of defeat.

The Bridge on the River Kwai was an enormous success, not only in the United States and England, but the world over, for its gripping portrayal of duty-bound men in a war capable of bringing out both the best and worst of humanity. David Lean's film is a sweeping examination of the all-consuming damage of war, on the scale of a spectacle rarely seen before or since.

UHD
Fast forward to the 1980s as Wonder Woman's next big screen adventure finds her facing a wide array of foes including Max Lord and The Cheetah as Wonder Woman 1984 flies in on Blu-ray and 4K UHD 22nd March 2021 from Warner ... END_OF_DOCUMENT_TOKEN_TO_BE_REPLACED
Top PicksView