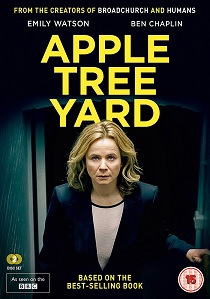 Arrow Films is pleased to announce the DVD and Blu-Ray Box Set release of BBC One's audacious psychological thriller Apple Tree Yard on 20th February 2017. The four-part drama series will also be available to download from iTunes episode by episode with the first episode available on 23rd January 2017.

Based on Louise Doughty's best-selling novel, Apple Tree Yard has been adapted for BBC One by BAFTA winning screenplay-writer Amanda Coe (Room At The Top, Life In Squares) and produced by Kudos (River, Broadchurch).

Married with two grown-up children, Yvonne Carmichael (Emily Watson), an eminent geneticist, lives a contented, conventional suburban life. But her world spirals into chaos, when a chance encounter leads to an impulsive and passionate affair with a charismatic stranger (Ben Chaplin).

Despite all her careful plans to keep her home life and career safe and separate from her affair, fantasy and reality soon begin to overlap and everything she values is put at risk, as a life-changing act of violence leads to a Crown Court trial.

Yvonne's downward trajectory is searingly realised; hers is a life ripped apart as the consequence of one, single, spur-of-the-moment decision. A decision any one of us might make.