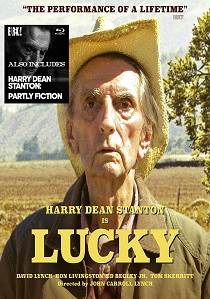 Lucky follows the spiritual journey of Harry Dean Stanton's character 'Lucky', a cantankerous, self-reliant 90 year old atheist, and the quirky characters that inhabit the Arizona town where he lives. Having out-lived and out-smoked all of his contemporaries, the fiercely independent Lucky finds himself at the precipice of life, thrust into a journey of self-exploration, leading towards that which is so often unattainable: enlightenment.

Released in the US just days after Stanton's death at age 91, Lucky, is at once a love letter to the life and career of Harry Dean Stanton as well as a meditation on mortality, loneliness, spirituality, and human connection.

Related Articles
Twin Peaks: A Limited Event Series
Paterson, Life
Kill the King, The Pretty One, The Conjuring, Going the Distance, Tully, The Man Who Killed Hitler And Then The Bigfoot, The Professor
A Hologram For The King, Contact, Alien: 40th Anniversary
Cat People: Collectors Edition, Family Tree, What's Your Number?, A Turtle's Tale: Sammy's Adventures 3D, For Your Consideration, Who Killed the Electric Car?, Amazon Women on the Moon: Special Edition
One from the Heart, The Open Road, Alien: 40th Anniversary
Comments
UHD Releases News Pick