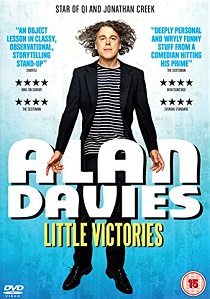 Throughout 2014 and 2015, Alan Davies toured his hugely successful stand-up show Little Victories to a rapturous reception in all corners of the UK, Australia and New Zealand with stops in Amsterdam, Antwerp, Dublin, Geneva & Zurich on the way.

Following on from his impressive return to live stand-up, Life Is Pain, he immediately set about creating an even funnier, more personal and hilarious performance. This is classic stand-up from a master storyteller at the top of his game.

UHD
Almost four decades after he drew first blood, Sylvester Stallone is back as John Rambo in a deadly journey of vengeance as Rambo: Last Blood is released on DVD, Blu-ray and 4K UHD 13th January 2020 ... END_OF_DOCUMENT_TOKEN_TO_BE_REPLACED
Top PicksView