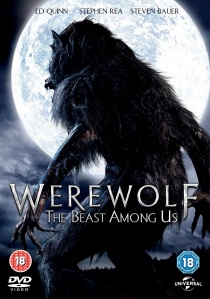 Werewolf - The Beast Among Us, released on DVD and Blu-Ray on 22nd October 2012, is the latest incarnation of monster movie, brought to you by Universal Studios, the studio behind the legacy of werewolf movies from The Wolf Man, American Werewolf in London and most recently The Wolfman.

When a mysterious creature terrorizes a village by moonlight, a local young man, Daniel (Guy Wilson, NCIS, Castle) struggles to protect his loved ones from such a fearsome and relentless beast. Daniel witnesses the horrific results of the attacks with the local doctor (Stephen Rea, Underworld: Awakening, V for Vendetta, The Crying Game) and, despite his mother's (Nia Peeples, Pretty Little Liars, The Young and the Restless) protests, soon convinces a team of skilled werewolf hunters (Stephen Bauer, Breaking Bad, Scarface, Primal Fear & Adam Croasdell, Supernatural, East Enders, The Prince and Me 3) to let him join their quest to hunt the beast down.

Whilst Daniel dreams of destroying the ruthless predator, it soon becomes clear that the creature is stronger, smarter and more dangerous than anything the werewolf hunters have ever faced before. Their series of violent escapades soon become more gruesome than ever expected and their misadventures begin to escalate out of control, with horrifying consequences.

DVD
Fast forward to the 1980s as Wonder Woman's next big screen adventure finds her facing a wide array of foes including Max Lord and The Cheetah as Wonder Woman 1984 flies in on Blu-ray and 4K UHD 22nd ... END_OF_DOCUMENT_TOKEN_TO_BE_REPLACED
Top PicksView