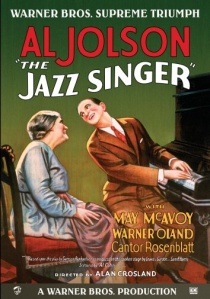 The movie, which brought Broadway superstar Al Jolson "alive" and seemingly singing from the screen, was an immediate sensation when it opened in 1927 and created a revolution in the history of the motion picture industry. Warner Home Video proudly presents The Jazz Singer in a deluxe 2-disc 80th Anniversary Special Edition with the film itself immaculately restored and remastered from earliest surviving nitrate film elements and original Vitaphone sound-on-disc recordings.

Hours of rare, and never-before seen features include a myriad of vintage shorts and film excerpts, a 1947 radio show adaptation featuring Jolson a Tex Avery cartoon and a commentary from film historians Ron Hutchinson (founder of The Vitaphone Project) and Vince Giordano. Disc two contains a new full-length documentary feature, The Dawn of Sound, commissioned by Warner Home Video specifically for this very special DVD release. The 93-minute film covers the 30+ year struggle to successfully unite sound and image on motion picture screens. The fascinating narrative of failures and triumphs is propelled by insights from notable film historians as well as interviews from many talents who reveal their personal experiences of this tumultuous period in film history.

The Jazz Singer stars entertainment legend Al Jolson in a story that bore a few similarities to his own life story. Jolson portrays a would-be entertainer whose show-business aspirations conflict with the values of his rabbi father (Warner Oland). The Jazz Singer began life as a 1925 Broadway play, and was revived early in 1927, starring George Jessel. The Warner brothers offered Jessel the opportunity to reprise his stage role on the screen, but he declined and the part was finally offered to Jolson, who was then at the height of his popularity.

Jolson had broken new ground on the stage and sold millions of phonograph records. He found the challenge of conquering the screen via the new Vitaphone technology irresistible. Jolson headed to Hollywood and began work on The Jazz Singer at a fervent pace. Only a few months later, his labours resulted in the creation of an indelible piece of motion picture history.

While a few earlier sound films had bits of dialogue, they were all shorts. The first Warner Bros. Vitaphone feature film, Don Juan (1926), starred John Barrymore, and was a handsomely mounted epic. It was a silent film, but one that featured a synchronized instrumental score and sound effects. Its success drove Warner Bros. to try and expand the potential of VItaphone. Like Don Juan, The Jazz Singer was initially conceived as a silent feature film, with synchronized underscore and sound effects, but this film would have synchronized singing sequences built around Jolson performing as only he could.

There was never any intention to have dialogue in the film, but during his first vocal performance, Jolson improvised the words: "Wait a minute, wait a minute, you ain't heard nothin' yet!" In actuality, The Jazz Singer contains a total of only two minutes of synchronized talking, most of it improvised, while the rest of the "dialogue" is presented through the typical standard "title cards" found in all silent movies of the era. But after Jolson uttered his now famous line, the rest was history.

The movie premiered at the Warner Theatre in New York City on October 6, 1927 and soon became a national phenomenon, limited only by the relatively small amount of theatres (200) who were already equipped with Vitaphone's sound-on-disc technology (a process developed by Western Electric and Warner Bros. wherein a 16" disc was synchronized with standard 35mm projection equipment). The film was a smash everywhere it played, and led to the installation of sound equipment all over the nation. Less than 2 years later, nearly 8000 theatres were wired for sound. Fueled by Jolson's charisma and Vitaphone, The Jazz Singer created the momentum for "talking pictures" that couldn't be stopped. Silent films would soon become virtually extinct.

Directed by Alan Crosland, the film co-stars Warner Oland, May McAvoy, and Eugenie Besserer Among the hit songs featured in the film are Jolson's trademarks, Toot-Toot-Tootsie, Goodbye, Dirty Hands, Dirty Face, My Mammy, and a then-new song composed by Irving Berlin - Blue Skies

BD
A detective in a small Pennsylvania town investigates a local murder while trying to keep her life from falling apart in Mare of Easttown, released on DVD and Blu-ray 13th September 2021 from Warner ... END_OF_DOCUMENT_TOKEN_TO_BE_REPLACED
Top PicksView