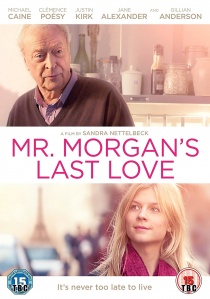 From the day Pauline (Clemence Poésy) lends him a helping hand on the bus, the stubborn and weary Matthew Morgan (Sir Michael Caine) stumbles back to happiness. Swept off his old feet by the young woman's disarming vitality and unwavering optimism, the quiet teacher becomes an unlikely student of living. In their everyday adventures of walks through Paris, lunches in the park, and trips to the country, the odd couple explore the treasures of friendship, the comfort of companionship, the taste of romance - and the meaning of family.

Through their mutual restoration of faith in people who care, Pauline embraces the idea of a new kind of family while Matthew finally reconnects with his estranged son Miles, who in turn finds himself deeply affected by the changes in his father.

UHD
Fast forward to the 1980s as Wonder Woman's next big screen adventure finds her facing a wide array of foes including Max Lord and The Cheetah as Wonder Woman 1984 flies in on Blu-ray and 4K UHD 22nd March 2021 from Warner ... END_OF_DOCUMENT_TOKEN_TO_BE_REPLACED
Top PicksView