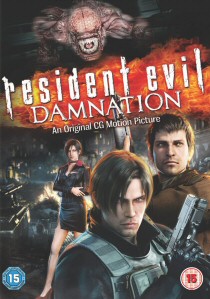 As war wages in Eastern Europe, the use of Bio Organic Weapons (B.O.W.s) explodes into a terrifying new dimension in Resident Evil : Damnation, available on Blu-ray and DVD from Sony Pictures Home Entertainment on 24th September 2014. Based on CAPCOM's multi-million dollar video game series and the live-action film franchise that has grossed nearly $700M in worldwide box office, Resident Evil : Damnation is the terrifying next chapter in the smash hit Resident Evil saga.

The Resident Evil : Damnation Blu-ray and DVD come equipped with UltraVioletT and a host of killer bonus features, including the Las Plagas: Organisms of War featurette, voice bloopers and a making of featurette "The DNA of Damnation". As an added bonus to fans, the Blu-ray release also features an exclusive Conceptual Art Gallery, showcasing designs of the movie's unique locations and terrifying monsters.

United States special agent Leon S. Kennedy sneaks into a small Eastern Europe country to verify rumors that Bio Organic Weapons (B.O.W.s) are being used in war. Right after his infiltration, the US government orders him to leave immediately. Determined to uncover the truth, Leon ignores the order and enters the battlefield to end the chain of tragedies caused by the B.O.W.s.

DVD
After more than thirty years of service as one of the Navy's top aviators, Pete 'Maverick' Mitchell is back where he belongs as Top Gun: Maverick flies onto DVD, Blu-ray and 4K UHD 31st October 2022 from Paramount Home ... END_OF_DOCUMENT_TOKEN_TO_BE_REPLACED
Top PicksView