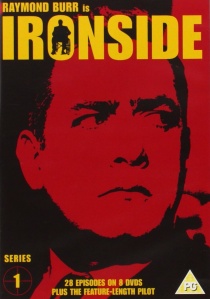 Raymond Burr (Perry Mason) stars in his defining role as the indefatigable wheelchair-bound Chief of Detectives in the ground-breaking TV drama, Ironside. Available to own on DVD for the first time, Ironside: The Complete First Series is released as an 8 disc box set on 25th August 2008, courtesy of Anchor Bay Entertainment. Paralysed from the waist down by a sniper's bullet, Robert Ironside (Burr) leads his own special unit, solving major crimes on the streets of San Francisco with a crack team of investigators, including Detective Sergeant Ed Brown (Don Galloway), policewoman Eve Whitfield (Barbara Anderson) and ex-con Mark Sanger (Don Mitchell).

Across 8 series from 1967-1975, Ironside confronted the hottest issues of its time - civil rights, drugs, hippies, rock 'n' roll - giving television its first disabled hero and star, Raymond Burr (Perry Mason), a second major television hit. Ironside's inaugural season boasts original music by Quincy Jones and an array of special guest stars - including Harrison Ford (Indiana Jones and the Kingdom of the Crystal Skull), Bruce Lee (Enter the Dragon), Jack Lord (Hawaii Five-O), Susan Saint James (McMillan and Wife) and David Carradine (Kill Bill) among many others - as it began its eight-year run as destination television for millions across the globe.

Featuring 28 original episodes plus the feature-length pilot, Ironside: The Complete First Series is the definitive collection for fans of this much-loved programme.