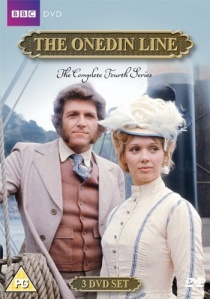 The Onedin Line returns to take up the romantic adventure story of a Liverpool shipping family in a vividly pictorial fourth series. From 1971 to 1980, millions followed the drama and spectacle of this lavishly-filmed television series following the trials and triumphs, loves and betrayals, adventures and disasters of James (Peter Gilmore), his family and others in the Onedin Line fleet and boardroom. Embark on the adventure with The Onedin Line Series Four, available on DVD from 8th August 2011, from 2entertain.

Series Four begins in the mid 1870s with the industrial revolution bringing change on the high seas as well as on land. James Onedin, still trying to expand his shipping interests, finds that merchants are demanding the swifter transport provided by steam. Now his principle rival in this cut-and-thrust world is his sister Elizabeth. On the death of her husband and father-in-law she inherits control of the Frazer line and soon proves herself as an equal to her brother in ruthlessness and dynamism.

Robert Onedin, a Member of Parliament, is doing his best to maintain an independent life and to avoid being overwhelmed by his domineering family. Meanwhile James realises that his daughter Charlotte is suffering from being passed from the care of one female relation to another and establishes a house for her in the charge of her attractive governess Letty.

Elizabeth Onedin takes more than a professional interest in Matt Harvey, a young captain. And Captain Baines is still an Onedin Line officer, although by the end of this series his tolerance of James's ruthlessness is exhausted.

Follow the exciting tale of ruthless men, tempestuous women and violent seas in this three disc DVD boxset complete with all thirteen episodes from series four.