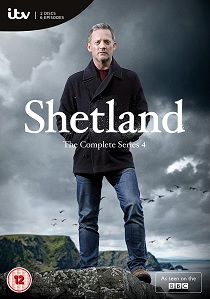 Acclaimed BBC One drama, Shetland sees the return of Douglas Henshall, Alison O'Donnell, Steven Robertson, Mark Bonnar and Julie Graham alongside new faces in the fourth series of the Scottish crime drama based on the novels by Ann Cleeves.

This new series is an original story which sees Perez deal with murders from the past and present with unsettling similarities. When Shetlander, Thomas Malone (played by Stephen Walters) has his murder conviction overturned after 23 years behind bars, DI Perez has to reopen the investigation into the 1994 death of local teenager, Lizzie Kilmuir.

As suspicion surrounds Malone, a local journalist is found murdered in similar circumstances and he finds himself firmly in the frame again. Has Malone fooled the system in to releasing him only to murder again? Or was he a victim of a miscarriage of justice? As pressure mounts on Perez, he must look beyond the gossip and prejudice to get to the truth.

Shetland's long-term collaborator David Kane (Stonemouth) returns as the writer on four of the six episodes alongside Louise Ironside (Call The Midwife, Law & Order) as the writer of episode two and Paul Logue (DCI Banks, Death In Paradise) for episode three. Shetland is directed by Lee Haven Jones (Vera) and Rebecca Gatward (Grantchester, EastEnders). This new series sees the return of Eric Coulter (Our Girl, Case Histories) as Producer and is executive produced by Kate Bartlett for ITV Studios and Gaynor Holmes for BBC Scotland.

UHD
Based on the bestselling comic book, Vin Diesel stars as Ray Garrison, a soldier recently killed in action and brought back to life as the superhero Bloodshot, available 8th June 2020 from Sony ... END_OF_DOCUMENT_TOKEN_TO_BE_REPLACED
Top PicksView