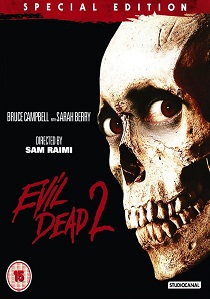 After the shocking and notorious cult classic Evil Dead impaled its way into the minds of a whole generation by becoming one of the original 'video nasties', visionary, maverick director Sam Raimi (Spider Man 1-3) decided to elaborate on its twisted scenario by creating one of the most visually deranged and psychotically demented horror movies to ever splatter its way across cinema screens.

Featuring b-movie legend Bruce Campbell in his most iconic role, as the fantastically unhinged Ash, Evil Dead II is a gore-fuelled, splatstick masterpiece.

Ash, (Bruce Campbell: Army of Darkness), the sole survivor of The Evil Dead, takes his girlfriend Linda (Denise Bixler: Crisis in the Kremlin) to a secluded cabin in the woods where he plays back a professor's tape recorded recitation of passages from the Book of the Dead.

The spell calls up an evil force from the woods that turns Linda into a monstrous Deadite and threatens to do the same to Ash. He is forced to single-handedly battle the legions of the damned as the most lethal - and groovy - hero in horror movie history.

Evil Dead II gets a deluxe Blu-ray treatment on April 15th packed with new special features that revisit every aspect of the film's shoot with over 20 cast and crew members, plus tons of existing content and a thrilling new High-Definition 1080P transfer.

BD
A 13-year-old girl named Meilin turns into a giant red panda whenever she gets too excited in Disney and Pixar's 25th feature film Turning Red, released on DVD, Blu-ray and 4K UHD 2nd May 2022 from Walt Disney Home ... END_OF_DOCUMENT_TOKEN_TO_BE_REPLACED
Top PicksView