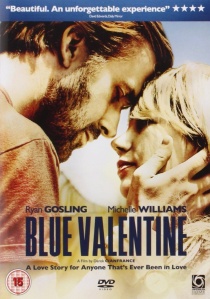 Blue Valentine, released on DVD and Blu-Ray from Optimum Home Entertainment on 9th May 2011, is the story of love found and love lost told in past and present moments in time. Flooded with romantic memories of their courtship, a young couple use one night to try and save their failing marriage.

We meet Dean (Ryan Gosling) and Cindy (Michelle Williams, Brokeback Mountain), a young couple living in small town Pennsylvania with their daughter Frankie, as their marriage is unravelling. Dean is a high-school dropout making his living as a blue collar worker, he has many creative talents but no ambitions beyond being a good husband and father. Cindy has always had ambition, studying medicine for years, and is a dedicated nurse on the verge of a promising new job. With the cracks widening and the end seemingly fast approaching, they spend one night in a motel to try and rekindle the flame before it's extinguished entirely.

But as so often in life, coming to terms with an end means revisiting the beginning, which is the journey this poignant, beautifully performed film takes us on, moving back and forth in time, back to their first meeting and whirlwind courtship, to allow Cindy and Dean, and us, to take the true measure of what is being lost 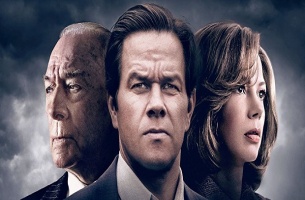 HotDVDBD
All The Money In The World, released on DVD and Blu-ray 14th May 2018 from Sony Pictures Home Entertainment, follows the kidnapping of 16-year-old John Paul Getty III and the desperate attempt by his devoted mother Gail to convince his billionaire ... END_OF_DOCUMENT_TOKEN_TO_BE_REPLACED
Comments
BD Releases News Pick