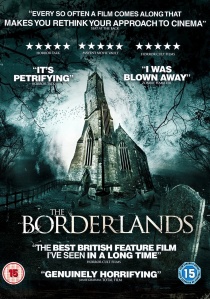 NewsHorror
News Article Go back to homepage
British horror The Borderlands, released on DVD by Metrodome Distribution on 4th April 2014, follows a team of specialists from the Vatican who are drawn to a remote West Country church by reports of mysterious occurrences in the area.
Drew Casson, Lee Arnold, Sarah Annis, Aidan McArdle, Robin Hill, Gordon Kennedy
Elliot Goldner
Jezz Vernon, Jennifer Handorf
Metrodome Distribution
1 hour 29 minutes
04/04/2014
#TheBorderlands
Thank you for supporting DVD365.net when you order using the link(s) below. As an Amazon Associate we earn from qualifying purchases
Buy DVD
Information

Don't believe everything you see! A team of Vatican investigators are sent to the British West Country to look into reports of paranormal activity during a Christening at a newly re-opened remote church. Father Crellick has webcam proof of artifacts moving on the altar and other weird happenings. But two of the three-man team aren't so sure.

Deacon and Father Mark Amidon are experts in the field of faked miracles and play the footage continually looking for wires and trickery. Going back through church records though, the holy place does seem to have a history of strange occurrences, and there is that raspy scratching sound they keep hearing coming from the walls. So they set up cameras in the nave and around the pulpit in the hope of filming and recording something unusual.

An elaborate fake, or could this one be the real deal? If they don't lose their way they may just find out.

UHD
A decade-defining classic from the imagination of Steven Spielberg and Chris Columbus, celebrating its 35 year anniversary, The Goonies is released on 4K UHD 31st August 2020 from Warner Home Video. END_OF_DOCUMENT_TOKEN_TO_BE_REPLACED
Top PicksView