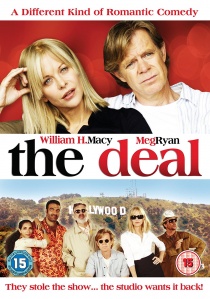 Adapted by actor William H. Macy (ER; He Was A Quiet Man) and director Steven Schachter (Above Suspicion) from the debut novel by best-selling author and Hollywood screenwriter Peter Lefcourt (The Dreyfus Affair; Eleven Karens), The Deal, released on DVD by High Fliers Films on 8th March 2010, is a bright and mature rom-com that also scores as a deft satire of the maniacal machinations of the Hollywood movie business.

Macy heads up an impressive all-star cast that includes Meg Ryan (Serious Moonlight; The Women), Elliot Gould (Ocean's Thirteen) and LL Cool J (NCIS: Los Angeles) in the darkly comic story of a movie producer on the edge, who is given a last-ditch shot at love and success when a dream project unexpectedly lands in his lap.

Driven to suicide by disillusionment and a series of career flops, struggling Hollywood producer Charlie Berns (Macy) is prevented from ending his life by the fortuitous arrival of his nephew, Lionel (Jason Ritter). An aspiring screenwriter, Lionel delivers to Charlie a copy of his first script, "Bill and Ben", a period piece concerning the rivalries between 19th century British statesmen, William Gladstone and Benjamin Disraeli. Experiencing a life-saving eureka moment, Charlie sets about making the film, but instead of taking the costume drama route decides to adapt it as an action-adventure tale of espionage set in the Middle East. Changing the film's title to "Ben Disraeli: Freedom Fighter", he casts recently-converted-to-Judaism African American action hero, Bobby Mason (LL Cool J), in the lead role and employs his rabbi (Gould) as an Executive Producer.

To oversee its financial and creative interests in the project, the studio involved appoints its own executive, Deidre Hearn (Ryan), a serious and conservative woman who immediately clashes with Charlie and his unconventional approach to filmmaking. However, when their star is kidnapped during filming on location in South Africa, Charlie and Deidre's commitment to keep the production alive forces them together both professionally and, against all odds, romantically.

Featuring two of Hollywood's most accomplished and likeable comic actors in Macy and Ryan, The Deal, much like Robert Altman's 'The Player', takes a wry look at the madness of the movie business while adding a welcome touch of romance as the icing on the cake.

BD
In The Undoing, released on DVD and Blu-ray 22nd March 2021 from Warner Home Video, a chasm opens up in the seemingly perfect life of a successful therapist: a violent death, a missing spouse, and a ... END_OF_DOCUMENT_TOKEN_TO_BE_REPLACED
Top PicksView