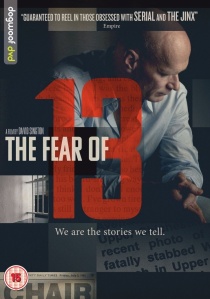 Following its highly acclaimed theatrical release, Dogwoof is delighted to announce the DVD release of David Sington's enthralling psychological thriller with a difference, The Fear of 13 on 25th January 2016.

After more than two decades on Death Row a convicted murderer petitions the court asking to be executed. But as he tells his story, it gradually becomes clear that nothing is quite what it seems.

A man sits in front of the camera and talks - documentary filmmaking boiled down to its essence. But the tale he tells is multi-layered. At its heart is the story of how, through literature, a man comes to master language and to recast the narrative of his own life, to change the story he tells about himself to himself, and so find redemption in the most unlikely of circumstances.

The Fear of 13 is a stylistically daring experiment in storytelling, a psychological thriller constructed from a single four-day long interview. In a monologue that is part confessional and part performance, Nick, the sole protagonist, tells a tale with all the twists and turns of classic crime drama. But as the story unfolds it reveals itself as something much deeper, an emotionally powerful meditation on the redemptive power of love and literature. A final shocking twist casts everything in a new light.