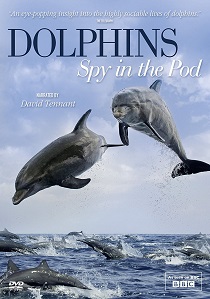 From the creators of Earthflight and Penguins - Spy In The Huddle comes an awe-inspiring new two-part series Dolphins - Spy In The Pod. Narrated by David Tennant this fascinating series shows some of the most captivating and clever animals on the planet as never before. It will air on BBC One and will come to DVD and Blu-ray on 17th February 2014.

From Spy Dolphin to Spy Tuna and Turtle, for the first time 13 camouflaged spy creatures infiltrate the secret underwater world of dolphins. Swimming right alongside them, these new spies reveal unique moments in the dolphins' lives - catching the waves with surfing bottlenose dolphins, discovering a megapod of superfast spinner dolphins and narrowly escaping the amorous advances of a turtle.

The Pacific is a dolphin playground. Here, spinner dolphins throw themselves into the air, corkscrewing up to seven times, and travelling up to 250 miles a day. On the other side of the world, off Mozambique, bottlenose dolphins eye up a giant clam, out of which rise the strangest spy creatures of all. The ever-curious dolphins locate them with their sonar, allowing the spies to then make their first discovery - a tiny five-day-old dolphin, still wrinkled from birth.

Meanwhile, Spy Turtle has its beady camera eye on a marauding pod of carefree male bottlenoses. For the first time, spy creatures reveal how they exfoliate at a coral 'spa' before catching the biggest waves and surfing in perfect synchronisation and as the amorous male bottlenoses try their luck with the ladies both spy creatures and baby dolphin get caught in the crossfire.

Off Florida, Spy Dolphin teams up with Spy Ray to make an extraordinary discovery - a pod of dolphins whipping up a mud wall to encircle mullet, and panic them straight into their waiting mouths. Most of the behaviour captured has never been seen before - bottlenose dolphins hunting alongside a mysterious gathering of stingrays, and a superpod of spinner dolphins chasing lantern fish, helped by two-metre wide mobula rays.

From the team at John Downer Productions this is one of the nation's favourite animals seen in a whole new light. John Downer commented: "Unlike Penguincams, this time our spy creatures were having to keep pace with fast-moving dolphins, often out in the deep ocean. The dolphins were very curious about their new neighbours and allowed them into their lives".

Related Articles
Ferdinand, The Highway Rat, Broadchurch: The Final Chapter, Jessica Jones: Season 1, Gracepoint, Broadchurch: Series 2, What We Did on Our Holiday, Postman Pat: The Movie, Broadchurch: Special Edition, The Escape Artist, The Politician's Husband, Broadchurch, Spies of Warsaw, The Pirates! In An Adventure With Scientists, Fright Night, Twenty Twelve: Series 1, Single Father, St Trinian's 2: The Legend of Fritton's Gold, Doctor Who : Series 2, Volume 5, Bad Samaritan, Hang Ups: Series 1, You, Me and Him, Mary Queen of Scots, Good Omens, Deadwater Fell, Des, Staged: Series 1 and 2, Around the World in 80 Days
Serengeti
For your consideration 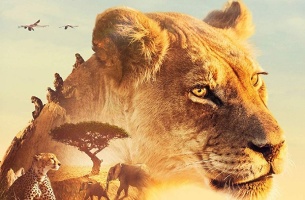 HotDVDBDTV
Serengeti, released on DVD and Blu-ray 12th August 2019 from BBC Worldwide is a dramatised story based on the real lived of Africa's most iconic animals. END_OF_DOCUMENT_TOKEN_TO_BE_REPLACED
Comments
UHD Releases News Pick