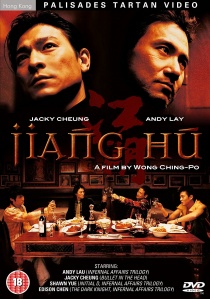 Andy Lau stars as Triad boss Hung Yan-jau, whose celebrations to mark the birth of his first son are overshadowed by his having to intervene in an internal power struggle amongst his men. Despite the possibility of the situation exploding into all-out gang warfare, Hung is reluctant to take the extreme action advised by his long-time friend and closest ally, Left Hand (Jacky Cheung), who recommends the assassination of not only the troublemakers, but of all members of their immediate families.

Claiming to have Hung's best interests at heart, Left Hand takes it upon himself to order the elimination of those who threaten Hung's position. Meanwhile, a parallel storyline is unfolding involving two ambitious young gangsters, one of whom is hoping to climb the ranks within the criminal underworld by accepting a seemingly suicidal mission to murder one of Hong Kong's most powerful Triad leaders...

A powerhouse cast of Hong Kong cinema's finest actors helps propel Wong Ching Po's dynamic thriller to a superbly stylised showdown on the city's rain drenched streets and a climactic twist that brings the movie's two plots together in a pleasingly dramatic finale.

UHD
One of the most compelling and conflicted characters in Sony Pictures Universe of Marvel Characters comes to the big screen as Jared Leto transforms into the antihero Michael Morbius as Morbius is released on 4K Ultra HD, Blu ... END_OF_DOCUMENT_TOKEN_TO_BE_REPLACED
Top PicksView