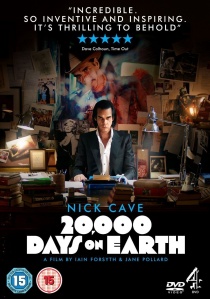 Drama and reality combine in a fictitious 24 hours in the life of musician and international cultural icon Nick Cave, as 20,000 Days On Earth is released on Blu-ray and DVD on 20th October 2014, courtesy of Channel 4 DVD.

Picturehouse Entertainment and Film 4 have teamed up once again, following the success of their collaborative releases The Imposter and The Stone Roses: Made of Stone, to present Iain Forsyth and Jane Pollard's award-winning and striking portrait of a music legend.

Featuring an original score by Nick Cave and Warren Ellis, the film poignantly examines what makes us who we are and celebrates the transformative power of the creative spirit.

Inspired by a line in Cave's song-writing notebook, in which he calculated being alive for 20,000 days, Cave's story is both extraordinary and strikingly universal. It takes us deep into the heart of how myth, memory, love and loss, shape each and every one of our lives, every single day.

The film had its World Premiere at the Sundance and Berlin Festivals earlier in the year to great critical and public acclaim, with Iain and Jane winning the Sundance Best Direction prize and Jonathan Amos the Best Editing Award in the World Cinema Documentary section.

Unpicking the artistic processes that make the man tick, 20,000 Days On Earth visits with those who have affected his life, personally and professionally, including hilarious moments shared with his regular collaborator, the multi-instrumentalist and epic beard-wearer Warren Ellis; actor and friend Ray Winstone; and Kylie Minogue, whom Cave duetted with on his mainstream hit single 'Where The Wild Roses Grow'.

Avowedly neither a music documentary nor a concert film, 20,000 Days On Earth still contains electrifying performances. This category-defying film possesses the same frankness and wry humour that run through all of Cave's work and pushes the form into new territory, exploring universal themes and celebrating the transformative power of the creative spirit.

Discover a never-before-seen verité observation of The Bad Seeds front-man's full creative cycle, as 20,000 Days On Earth is released on Blu-ray and DVD this October.

HotDVDBD
King Of Thieves, released 21st January 2019 on DVD and Blu-ray from StudioCanal, is the incredible true story of the spectacular Hatton Garden diamond heist, the biggest and most daring in British history. END_OF_DOCUMENT_TOKEN_TO_BE_REPLACED
Comments
BD Releases News Pick