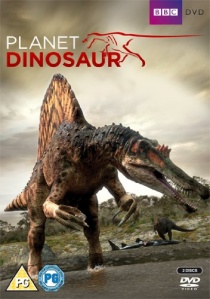 NewsScience Fiction
News Article Go back to homepage
Transporting you to locations across the planet and back through hundreds of millions of years, Planet Dinosaur brings to life the most amazing creatures that ever lived. Set to be a must-have gift for the whole family this Christmas, the BBC DVD and Blu-ray will be available to own from 24th October 2011.
Joe Middleton, Josh Hadley, Noah Antwiler
Josh Hadley
Josh Hadley
2entertain
Unknown
24/10/2011
Thank you for supporting DVD365.net when you order using the link(s) below. As an Amazon Associate we earn from qualifying purchases
Buy DVD
Buy BD
Information

Prepare to throw out your kids' T Rex toys and meet the real lizard kings. Transporting you to locations across the planet and back through hundreds of millions of years, Planet Dinosaur brings to life the most amazing creatures that ever lived to BBC One this autumn. Set to be a must-have gift for the whole family this Christmas, the BBC DVD and Blu-ray will be available to own from 24th October 2011.

This is unlike any dinosaur show you've seen before: a completely immersive visual experience studded with curious facts, jaw-dropping action and charismatic monsters whose discovery entailed a re-write of the prehistory books.

More species of dinosaur have been discovered in the last decade or so than over the preceding 200 years. Paleontologists now know that dinosaurs ruled the planet for more than 150 million years, that they spread to every part of the globe and that, to fill every niche, they evolved in ways more monstrous, more horrific and more bizarre than we ever imagined.

Such awesome creatures deserve a whole new way of bringing them back to life and Planet Dinosaur does just that. It's a new and totally immersive experience - a world created entirely in CGI, combining 3D with CSI style graphics - to plunge the audience into this prehistoric world; re-creating their habitats, the creatures and how they lived, from the analysis of their bones to rebuilding the dinosaurs and watching them fight to the death.

Planet Dinosaur brings audiences up-close and personal, experiencing dinosaurs in a more visceral and dynamic way than anything attempted before. Featuring creatures from as high in the arctic to South America, Planet Dinosaur reveals how the latest discoveries have led to a brand-new global perspective on the prehistoric era.

Only the biggest, baddest and most alien of the new dinosaur discoveries feature in this series available to own on DVD and Blu-ray and to download from iTunes. Terrifying monsters like the immense marine killer Predator X; Spinosaurus, a colossal 17m dinosaur which is a full four metres longer than T. rex; the canniballistic Majungasaurus and the Mapusaurus, suspected of hunting in a mob and bringing down giants such as Argentinosaurus, the biggest animal to have ever walked the Earth.

Plus, Nothronychus, the strange predator-turned-vegetarian with enormous sickle-shaped claws and the feathered glider Microraptor as well as the tiny tree-dwelling Epidexipteryx, with an ET-like long finger and a tail ending in a fan of feathers.

There's also evidence that the dinosaurs uncovered so far were not even the largest of their species...

This milestone new series for the BBC will be available in time for Christmas on DVD, in full high-definition glory on Blu-ray and to download episode-by-episode or as a series pass on iTunes. The DVD and Blu-ray will include exclusive never before broadcast extras including 'How to Build a Dinosaur' an incredible story of how a dinosaur makes the journey from the ground to a museum exhibit.