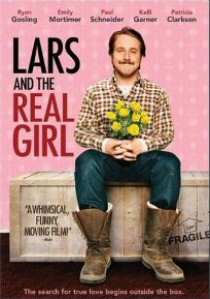 Written by Six Feet Under's Nancy Oliver, the heartfelt and critically-acclaimed comedy, Lars And The Real Girl tells the story of Lars Lindstrom, a loveable introvert whose emotional baggage has kept him from fully embracing life. Starring the Academy-Award nominated Ryan Gosling and with a stellar supporting cast including Emily Mortimer and Patricia Clarkson, this endearing and tender story is released to buy and rent on DVD on 18th August 2008 from MGM and Twentieth Century Fox Home Entertainment.

Lars Lindstrom (Gosling; Half Nelson, The Notebook, Fracture) is an awkwardly shy young man in a small northern town who finally brings home the girl of his dreams to his brother Gus (Paul Schneider; All The Real Girls, The Assassination of Jesse James by Robert Coward Ford) and sister-in-law, Karin's (Mortimer; The Pink Panther, Match Point) home.

The only problem is that she's not real - she's a sex doll Lars ordered off the internet. But sex is not what Lars has in mind, but rather a deep, meaningful relationship. His sister-in-law is worried for him, his brother thinks he's nuts, but eventually, upon the recommendation of the family doctor (Clarkson; Good Night And Good Luck, Welcome To Collinwood, Dogville) the entire town goes along with his delusion in support of this sweet natured boy that they've always loved.

Lars And The Real Girl on DVD includes delightful special features such as an exclusive deleted scene and the real story behind the film. Directed by Craig Gillespie (Mr Woodcock) and boasting a great soundtrack, this film has been hailed as the quirky, feel-good movie of the year so make sure you join Lars on his quirky and life-affirming search for true love on DVD this August.

HotDVDBDUHD
Released on DVD, Blu-ray and 4K UHD 14th June 2021 from Warner Home Video, legends collide in Godzilla vs. Kong as these mythic adversaries meet in a spectacular battle for the ages, with the fate of the world hanging in the balance. END_OF_DOCUMENT_TOKEN_TO_BE_REPLACED
Hot PicksView