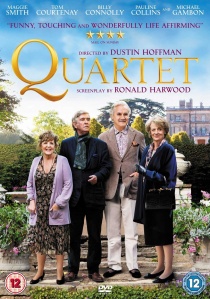 Discover a warm, fun and bittersweet look at growing old disgracefully, orchestrated by a British ensemble of acting maestros, as the number one UK box office smash hit comedy Quartet comes to Blu-Ray, DVD and digital download on 6th May 2013, courtesy of Momentum Pictures Home Entertainment.

Life-long friends Wilf and Reggie, together with former colleague Cissy, are residents of Beecham House, a home for retired opera singers. Every year on Giuseppe Verdi's birthday, the residents unite to give a concert to raise funds for their home. But when Jean Horton, a former grande dame of the opera fallen on hard times, also Reggie's ex-wife and the fourth and most celebrated member of their former quartet, moves into the home to everyone's surprise, the plans for this year's concert start to unravel.

As old grudges threaten to undermine past glories and the atrical temperaments play havoc with the rehearsal schedule, it becomes apparent that having four of the finest singers in English operatic history under one roof offers no guarantee that the show will go on. Quartet is a joyous and entertaining film about redefining old age and growing old with hope, demonstrating how art illuminates life and the human spirit remains undimmed even as the brightest stars start to fade.

The infinite list of film talent associated with this project does not stop in front of the camera, with a chorus of behind-the-scenes talent contributing to the magnificent and uplifting feel of this cinematic triumph. Creative talent includes; Director of Photography, John de Borman BSC (Made In Dagenham, An Education); Production Designer, Andrew McAlpine (Made In Dagenham, The Piano); Editor, Barney Pilling (One Day, Never Let Me Go); Casting Director, Lucy Bevan (One Day, The Duchess); Costume Designer, Odile Dicks-Mireaux (One Day, The Constant Gardener); and Make-u p artist Daniel Phillips (The Queen, Tsunami: The Aftermath).

Kick back and enjoy a beautiful, adagio performance set to strike a chord in the heart of the nation as Quartet comes to Blu-Ray, DVD and digital download on 6th May 2013.

DVD
In The Undoing, released on DVD and Blu-ray 22nd March 2021 from Warner Home Video, a chasm opens up in the seemingly perfect life of a successful therapist: a violent death, a missing spouse, and a ... END_OF_DOCUMENT_TOKEN_TO_BE_REPLACED
Top PicksView