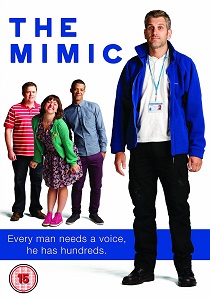 The Mimic, released on DVD by 2entertain on 15th April 2013, is a sitcom written by Matt Morgan and directed by Kieron Hawkes. It's the story of Martin Hurdle (Terry Mynott - Very Important People), a seemingly unremarkable maintenance man who, in fact, conceals an exceptional talent. What makes Martin unique is his uncanny ability to mimic voices.

Labouring without prospect at a large pharmaceutical company, Martin's options appear bleak. His one true friend in life is a girl called Jean (Jo Hartley - This Is England) who, despite having the best intentions for Martin, is also his live-in landlord.

The only other 'friend' Martin can really boast of is Neil (Neil Maskell - Utopia), a newsagent petrified by the news. Now, in a huge revelation by a former lover, Martin is about to discover that he could be the father of an eighteen-year-old son called Steven (Jacob Anderson - Adulthood).

With their first meeting on the horizon, is this the news that will finally prompt Martin to escape his prolonged adolescence? And if it is, just how will he use his voices to cope with this life-changing development?

3D-BD
The surviving members of the resistance face the First Order once again, and the legendary conflict between the Jedi and the Sith reaches its peak as Star Wars: The Rise of Skywalker is released on ... END_OF_DOCUMENT_TOKEN_TO_BE_REPLACED
Top PicksView