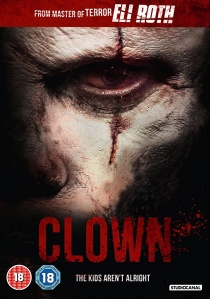 From producer and splatter-maestro Eli Roth (Hostel; Grindhouse) comes Clown, the nightmarish tale of a doting father who undergoes a gruesome, bloodthirsty transformation - leaving him a terrible desire for eating children...

It's Jack's 10th birthday, but the clown has cancelled. His dad, Kent, finds an old clown suit in the attic and saves the party. But after the party is over, Kent has a problem. the suit won't come off. What starts as a joke quickly turns into a hellish nightmare. Kent can feel himself changing, and his desperate attempts to free himself just leave him in agonising pain.

As the suit takes hold of his body, Kent slowly endures a brutal transformation. As he changes, an uncontrollable hunger begins to consume him, an overwhelming and insatiable hunger... for children.

BD
In The Little Things, released on DVD and Blu-ray 10th May 2021 from Warner Home Video, Kern County Deputy Sheriff Joe "Deke" Deacon is sent to Los Angeles for what should have been a quick evidence ... END_OF_DOCUMENT_TOKEN_TO_BE_REPLACED
Hot PicksView