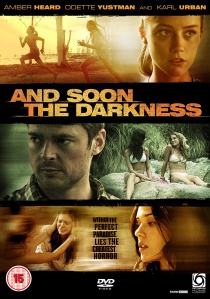 On a trip of a lifetime, Ellie (Odette Yustman) and Stephanie (Amber Heard) break away from their boring tour group to discover Argentina in pursuit of breathtaking scenery, adventure and fun. They reach the once-prosperous town of Alemana, where beneath the sumptuous landscape lies a dark secret.

After a long night of bar-hopping, the girls get into an argument, and Stephanie heads out alone in the morning to cool off. But when she returns, Ellie has disappeared. Finding signs of a struggle, Stephanie fears the worst, and turns to the police for help. But the local authorities have their hands full already - with a string of unsolved kidnappings targeting young female tourists.

Sceptical of the sheriff's competency, she enlists help from Michael (Karl Urban), an American ex-pat staying at their hotel. Together they go on a frantic search for Ellie, but Stephanie soon realizes that trusting his seemingly good intentions may drag her farther from the truth. With danger mounting, and time running out, Stephanie must find her friend before darkness falls.