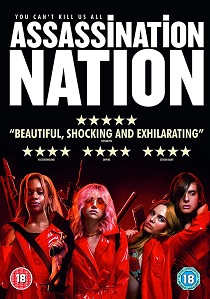 Hailed by fans as the movie of our generation, the film encompasses subversive themes, garnering it with a reputation as "the most aggressive high-school movie in film history" (Indiewire, Eric Kohn). Packed with explosive action, satire and dark humour, Assassination Nation on Blu-ray and DVD comes with exclusive bonus content including never-before-seen deleted and extended scenes, and a hilarious gag reel taking viewers deeper into the provocative and twisted cautionary tale, making it a must-own film for horror and action fans alike.

High school senior Lily (Young) and her three best friends live in a world controlled by social media, filled with selfies, emojis, snaps, and sexts. But when their small town of Salem is thrown into a massive data hack outing citizens' private information into the public view, the community descends into full-blown anarchy. When Lily becomes the target after being falsely blamed for the hack, her squad bands together to save themselves and survive a treacherous, blood-soaked night.

HotBDUHD
A winner of awards across the world including Best Foreign Language Film Oscar, 5 BAFTA Awards including Best Actor, Original Screenplay and Score, the Grand Prize of the Jury at the Cannes Film Festival and many more, Cinema Paradiso is released on Blu-ray and 4K UHD 28th September 2020 from Arrow Video. END_OF_DOCUMENT_TOKEN_TO_BE_REPLACED
Hot PicksView

A former Marine turned doorman at a luxury New York City high-rise must outsmart and battle a group of art thieves and their ruthless leader in The Doorman, released on DVD 25th January 2021 from Lionsgate Home Entertainment.

A showdown between two kids about eleven, in a local playground. Swollen lips, broken teeth... Now the parents of the "victim" have invited the parents of the "bully" to their apartment to sort it out. Cordial banter gradually develops a razor-sharp edge as all four parents reveal their laughable contradictions and grotesque prejudices. ...
Movie quote