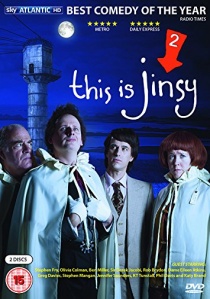 Beautifully eccentric This Is Jinsy is a comedy series like no other, the long awaited, much anticipated second series recently returned to Sky Atlantic and comes to DVD from Delta Leisure on 24th February 2014.

Created by and starring Chris Bran and Justin Chubb and directed by Matt Lipsey (Little Britain, Psychoville), This Is Jinsy has been described by Radio Times as having 'elements of Python, Milligan, The Wicker Man, The Prisoner, The Mighty Boosh, Gormenghast and any number of other old cult hits, yet has carved out a world all its own'.

From an invasion of ancient hair to a dangerous encounter with a tribe of wild accountants, from the mysterious scheming of archOenemy The Speckled PomOPom to a quest for The Golden Woggle. the island is once again peopled with a veritable who's who of great British stars as they've never been seen before including Stephen Fry, Olivia Colman, Ben Miller, Sir Derek Jacobi, Rob Brydon, Dame Eileen Atkins, Greg Davies, Stephen Mangan, Jennifer Saunders, KT Tunstall, Phil Davis and Katy Brand.

UHD
Sam Mendes, the Oscar®-winning director of Skyfall, Spectre and American Beauty, brings his singular vision to his World War I epic, 1917 to DVD, Blu-ray and 4K Blu-ray 18th May 2020 from ... END_OF_DOCUMENT_TOKEN_TO_BE_REPLACED
Top PicksView