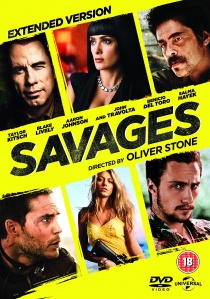 Based on Don Winslow's audacious 2010 novel, Savages is an intense and graphic drama set against the harsh, swift justice of the illicit drug trade as a pair of peace-loving Southern Californians find themselves locked in an all-out war against a merciless drug lord.

The Blu-Ray and DVD includes an Extended Edition of the film not shown in theaters. In addition, the Blu-ray also includes exclusive deleted scenes and a behind-the-scenes featurette with the entire cast that reveals the secrets of the visceral and sexy film. Both versions also include a Digital Copy of the film that is compatible with iPhone, iTunes, iPad, iPod, iPod touch, Android as well as UltraViolet.

UltraViolet is the revolutionary new way for consumers to collect movies and television shows in the cloud to instantly stream and download to tablets, smartphones, computers and TVs. Consumers can now truly enjoy their movies anytime, anywhere on the platform of their choice.