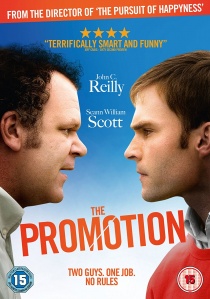 Written and directed by Steven Conrad, Seann William Scott and John C Reilly star in the quirky off-beat comedy The Promotion which will be released by High Fliers on DVD on 23rd April 2012.

Both actors will have a high profile in UK cinemas around the DVD's release date. Seann William Scott, currently starring in Goon, will be seen again in the Spring when he reprises his role for the final film in the hugely successful American Pie franchise while John C Reilly will be starring with Sacha Baron Cohen, Anna Faris and Ben Kingsley in The Dictator which opens in May.

Living the American Dream, happily married Doug Stauber's professional ambitions are about to be realised when his boss at the Chicago supermarket chain where he works assures him he's a shoo-in to manage a new neighbourhood store. However, enter rival Richard Wehlner. He wants the job too, has a better CV than Doug, has a wife and a daughter and is regarded by seemingly everybody as an all-round terrific guy.

How should Doug react to this challenge? Should he regard Richard as a friend, a colleague, a competitor or an enemy? Richard, it seems, has demons and a past but with the help of motivational tapes he's determined to succeed.

Soon their professional rivalry explodes as the two men fight it out in corporate and psychological tests to determine who gets the dream promotion to supermarket store manager! A clear case of two guys, one job and no rules!

BD
A 13-year-old girl named Meilin turns into a giant red panda whenever she gets too excited in Disney and Pixar's 25th feature film Turning Red, released on DVD, Blu-ray and 4K UHD 2nd May 2022 from Walt Disney Home ... END_OF_DOCUMENT_TOKEN_TO_BE_REPLACED
Top PicksView