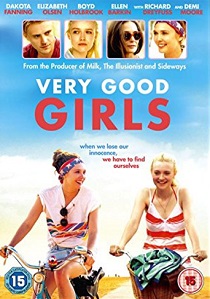 In a cosy corner of Brooklyn on a sweltering afternoon, best friends Lilly (Dakota Fanning, War of the Worlds, Coraline) and Gerri (Elizabeth Olsen, Godzilla, Kill Your Darlings) bump into a handsome, enigmatic stranger who quickly becomes an object of both their affections.

Lilly finds herself growing closer to David (Boyd Holbrook, Behind the Candelabra, Out of the Furnace) and as she struggles to tell Gerri, becomes increasingly caught between loyalty to her friend and her new found love.

However, when tragedy strikes Gerri's family, Lily's actions to help her devastated best friend create only disappointment and anger and leave Lilly with the very real possibility that she might lose both relationships.

How the girls resolve this situation will be a lesson for the rest of their lives, defining love as impossible without truth and the only thing that really sets you free.

DVD
Arriving on DVD and Blu-ray 31st May 2021 from Acorn Media (UK), the hit police corruption drama from the makers of Bodyguard returns as Series Six of Line of Duty sees AC-12 facing their most ... END_OF_DOCUMENT_TOKEN_TO_BE_REPLACED
Top PicksView