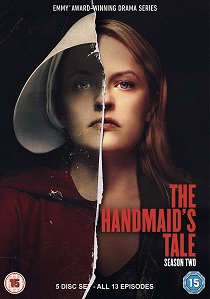 The Golden Globe® award-winning drama series returns with a second season shaped by Offred's (Elisabeth Moss) pregnancy and her ongoing fight to free her future child from the dystopian horrors of Gilead. "Gilead is within you" is a favourite saying of Aunt Lydia. In Season Two, Offred and all our characters will fight against - or succumb to - this dark truth. Standout performances were given by returning cast members including Joseph Fiennes, Yvonne Strahovski, Alexis Bledel, Madeline Brewer, Ann Dowd, O-T Fagbenle, Max Minghella, Samira Wiley and Amanda Brugel. Moss, Wiley, Bledel and Dowd have all won Emmy® Awards for their performances in the series. Season Two of the series garnered three Emmy® Awards.

This season also included notable guest appearances from Cherry Jones (The Perfect Storm) and Bradley Whitford (Get Out), as well as Academy Award® winner Marisa Tomei (My Cousin Vinny, The Wrestler). DVD
The end of the line is only the beginning in a wild, non-stop thrill ride through modern-day Japan as Bullet Train is released on DVD, Blu-ray and 4K UHD 24th October 2022 from Sony Pictures Home Entertainment END_OF_DOCUMENT_TOKEN_TO_BE_REPLACED
Top PicksView