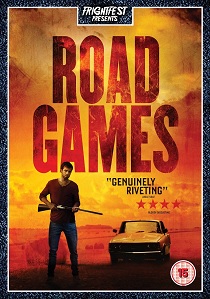 Starring Andrew Simpson and Joséphine de La Baume as two hitchhikers who get into trouble on the roads of rural France, Road Games is released on DVD by Icon Home Entertainment on 29th August 2016.

Jack, a young drifter heading back to England, meets fellow hitchhiker Veronique on a lonely road in rural France. They get a lift with an eccentric Frenchman who invites them back to his isolated house, where he lives with his nervy artist wife. The couple welcome the young pair into their home, saying they can stay as long as they like. But Veronique believes something is not quite right with this over-friendly, lonely couple - and might it have something to do with the serial killer who has been killing people on the stretch of road they were picked up on?

British director Abner Pastoll's French-set horror thriller smartly blends the thrills of a killer on the road film with the chills of the strangers stuck in an old dark house set-up - with nerve stretching results.

With an attractive pair of rising stars in the lead roles - Andrew Simpson and Joséphine de La Baume - and stellar performances from screen veterans Frédéric Pierrot and Barbara Crampton - along with a healthy dose of sex and violence, and some unique, shocking plot twists along the way, Road Games treads a familiar path in a very unique way.

With knowing nods to films including Switchblade Romance, Wolf Creek, The Hitcher and classic 1970 French road movie chiller And Soon The Darkness, and a stand out turn from 1980s scream queen Barbara Crampton, Road Games is a real treat for horror fans - as well as a fiercely effective nail-biter that ratchets up the tension in the final act to an almost unbearable degree.

Beautifully filmed, featuring a brooding, pulsing John Carpenter-esque synth score, and packed with delicious surprises (including a cameo corpse and a nifty post end-credits sequence), Road Games is a sensational thrill ride into the dark heart of rural France.

UHD
From the Wachowski brothers and Joel Silver, the masterminds behind The Matrix trilogy, comes another intriguing, action-packed fantasy-thriller in V for Vendetta, released on 4K UHD 2nd November 2020 ... END_OF_DOCUMENT_TOKEN_TO_BE_REPLACED
Top PicksView