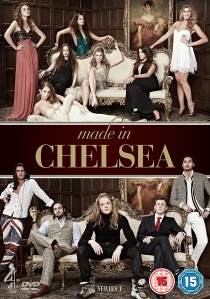 News
News Article Go back to homepage
Everyone has been hooked to the exploits of the group of glamorous, globe-trotting twenty-something's that are the focus of E4's hottest reality show, now Made In Chelsea the first series is being released on DVD on 19th September 2011 from 4DVD.
Victoria Baker-Harber, Rosie Fortescue, Mark-Francis Vandelli, Alexandra Felstead, Louise Thompson, Jamie Laing
Oli Tridgell, Jamie Roche, Damian Power, John Pereira
David Granger, Anthea Poli, Lucy McDermott, Andy Gill
4DVD
Unknown
19/09/2011
Thank you for supporting DVD365.net when you order using the link(s) below. As an Amazon Associate we earn from qualifying purchases
Buy DVD
Information

Everyone has been hooked to the exploits of the group of glamorous, globe-trotting twenty-something's that are the focus of E4's hottest reality show, now Made In Chelsea the first series is being released on DVD on 19th September 2011 from 4DVD. This new release offers the chance to re-live the tears and tantrums in preparation for Series Two coming to the small screen!

Made In Chelsea follows the lives and loves of a group of affluent young men and women, who live in London's most sought after postcode and party on the most elite social circuits. They're immaculately dressed, fiercely ambitious and known for partying hard - but beyond the posh accents, fast cars and glamorous holidays, life isn't all champagne and canapés. Viewers were captivated by the real-life rivalries and relationships that set tongues wagging behind closed doors in South West London, now they can reminisce time and time again with the DVD.

In anticipation of the new second series, Series 1 on DVD will allow you to recapture the champagne highs and tear-drenched lows of the first season in all its lustre!