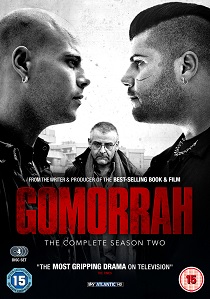 Arrow Films is pleased to announce the DVD and Blu-ray release of the complete second season of the gripping, intense, edge-of-your-seat, Italian crime drama Gomorrah on 25th July 2016.

Universally critically acclaimed as the most successful Italian TV production ever, the controversial gang warfare series returned for its second season on Wednesday 11th May at 9pm to Sky Atlantic.

The era of the Savastano clan, who once undisputedly reigned over north Naples, seems to be coming to an end. What lies ahead now is the largest ever power vacuum in the history of the "Camorra" - a coalition of crime families in and around the urban backstreets of Naples.

The king, Don Pietro Savastano (Fortunato Cerlino), has abdicated, only to be replaced by his son Genny Savastano (Salvatore Esposito) - at least momentarily. Although still having loyal soldiers, the Savastanos see themselves opposed by their once loyal right-hand man Ciro "the Immortal" Di Marzio (Marco D'Amore), who is not the only one working on ending their bloody reign.

The sinister drug baron, Conte, is back in town building alliances and there are two new contenders for the throne of north Naples. The only certainty about the future - nothing is certain.

Gomorrah is based on the international bestselling book by Roberto Saviano who exposed the Camorra mafia syndicate based in and around Naples, and has been living under police protection for eight years.

The Italian premiere of Series Two recently broke the record ratings of House of Cards and Game of Thrones. Additionally, the series has been sold in over 130 countries including America's Sundance TV.

3D-BD
The surviving members of the resistance face the First Order once again, and the legendary conflict between the Jedi and the Sith reaches its peak as Star Wars: The Rise of Skywalker is released on ... END_OF_DOCUMENT_TOKEN_TO_BE_REPLACED
Top PicksView