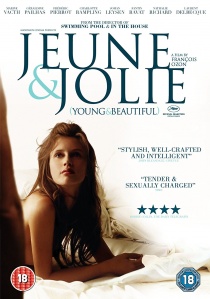 Released on DVD and Blu-ray by Lionsgate UK on 24th March 2014, written and directed by François Ozon (Swimming Pool, In The House), Jeune & Jolie (or Young & Beautiful) is a unique look at adolescent development into maturity.

Whilst on holiday with her family, seventeen year old Isabelle (Marine Vacth) experiences her first sexual relationship with an attractive young man. A few days later, and for no apparent reason, Isabelle casts him aside and cuts off all contact with him, behaving as if their encounter never happened.

When she returns home to Paris, Isabelle begins a dangerous new career; she sets up a profile on an escort website and lies about her age in order to make appointments with older, wealthy clients in chic, expensive hotel rooms. On the one hand she is a cool professional, catering to the sexual whims of the various men she encounters; on the other she is maintaining the illusion of being a regular school student for her parents and friends.

Her dangerous double life spirals out of control, however, and she is soon forced to deal with the consequences of what she has been doing.