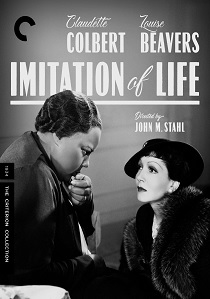 Imitation of Life: The Criterion Collection (1934)

Imitation of Life explores the friendship between two struggling single mothers: one (Claudette colbert; It Happened One Night) a working class white woman who ascends to the top of the business world, the other (Louise beavers; Beulah) her Black housekeeper, whose life is shattered by the rejection of her rebellious, white-passing daughter (Fredi washington; One Mile from Heaven).

It is this latter relationship-attuned to America's bitter racial realities and heartbreakingly enacted by trailblazing Black performers Beavers and Washington-that lends the film its transcendent emotional power.

This first adaptation of Fannie Hurst's best-selling novel boldly confronts the complexities and contradictions of racial identity, economic exploitation, and the limits of the American dream.

Imitation of Life is given the Criterion treatment and released on Blu-ray 27th February 2023 from Sony Pictures Home Entertainment.

DVD
In Brian And Charles, released on DVD and Blu-ray 10th October 2022 from Mediumrare, an inventor lives alone in a remote village in the countryside, inventing useless things out of found objects in his garage. That is until ... END_OF_DOCUMENT_TOKEN_TO_BE_REPLACED
Top PicksView