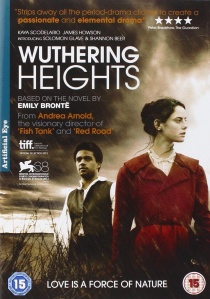 Winning the award for Best Cinematography at the Venice Film Festival 2011, Wuthering Heights is based on the classic novel by Emily Bronte and adapted for the screen by Andrea Arnold and Olivia Hetreed (Girl With A Pearl Earring).

This passionate tale follows two teenagers, Heathcliff and Cathy (Kaya Scodelario), whose elemental love for each other creates a storm of vengeance. After a Yorkshire hill farmer on a visit to Liverpool finds a homeless boy on the streets, he takes him home to live as part of his family on the isolated Yorkshire moors where the boy forges an obsessive relationship with the farmer's daughter.

Wuthering Heights was developed and co-funded by the Lottery through the UK Film Council's film funds. Beautifully shot in Yorkshire, this powerful adaptation of this classic tale is guaranteed to pull at your heart strings.