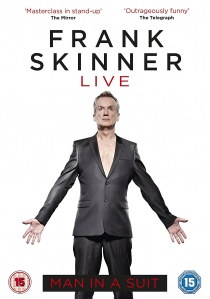 Recorded during his 40 night sell-out run at the Leicester Square Theatre and part of his highly anticipated 2014 tour, Frank delivers this critically acclaimed and hilarious show in his usual witty and hugely entertaining style.

Man In a Suit sold out its debut run at London's Soho Theatre in October 2013 and a subsequent five week residency at the Leicester Square Theatre at the start of 2014. A further two dates at the Leicester Square Theatre were announced earlier this year and Frank's UK tour was recently extended by a further 23 dates, with performances in Northern Ireland and the Republic of Ireland, and will conclude on 21st December.

Frank Skinner has hosted three series of BBC One's Room 101 and will present a second series of Portrait Artist of the Year (Sky Arts) in late 2014. As a radio presenter his Sony Award winning Absolute Radio show attracts over 600,000 listeners every Saturday morning and won Speech Programme at the 2014 Radio Academy Awards (formerly the Sonys). It was announced earlier this year that Frank has created and will host a brand-new comedy panel show The Rest is History for BBC Radio 4.

DVD
Inspired by real-events, The Serpent, released on DVD 22nd February 2021 from ITV Studios Home Entertainment, tells true story of how Charles Sobrajh, one of the most elusive & wanted criminals was ... END_OF_DOCUMENT_TOKEN_TO_BE_REPLACED
Hot PicksView