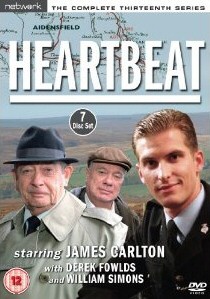 The multi-award winning, and hugely popular, ITV series Heartbeart returns to DVD when series thirteen is released on DVD by Network on 26th November 2012.

Set in rural North Yorkshire during the 1960s, Heartbeat's combination of crime and medical storylines, charismatic regular characters and wonderfully nostalgic soundtrack made it staple Sunday-night viewing for two decades, with the series' many prestigious awards including Best Performing Peak-Time Drama and several ITV Programme of the Year awards. Attracting a peak audience of 14 million, Heartbeat has garnered a devoted following and remains primetime viewing world-wide.

This series sees the marriage of Sgt. Merton and pharmacist Jenny Latimer, with PC Steve Crane tackling a wide range of cases while putting his role as Community Liaison Officer into practice. PC Bellamy plays the waiting game with Gina, Vernon comes to terms with life with - and without - his fortune and the series reaches a dramatic climax when a bitter custody battle ends in tragedy.

DVD
In The Undoing, released on DVD and Blu-ray 22nd March 2021 from Warner Home Video, a chasm opens up in the seemingly perfect life of a successful therapist: a violent death, a missing spouse, and a ... END_OF_DOCUMENT_TOKEN_TO_BE_REPLACED
Top PicksView