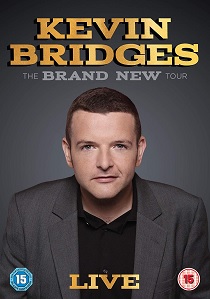 NewsStandup Comedy
News Article Go back to homepage
Recorded in front of a hometown crowd at the landmark SSE Hydro in Glasgow, Scotland's biggest comedy export Kevin Bridges returns with the hottest live stand-up DVD with The Brand New Tour - Live released on DVD and digital download on 7th December 2018.
Kevin Bridges
Universal Pictures (UK)
1 hour 20 minutes
07/12/2018
#KevinBridges #TheBrandNewTourLive
Thank you for supporting DVD365.net when you order using the link(s) below. As an Amazon Associate we earn from qualifying purchases
Buy DVD
Information

Scotland's biggest comedy export Kevin Bridges returns with the hottest live stand-up DVD to get your hands on this Christmas - The Brand New Tour - Live. Following his mammoth UK tour, The The Brand New Tour - Live will be released on DVD and digital download on 7th December 2018, and once again proves why Kevin Bridges is one of the most astute observational comedians around today.

Recorded in front of a hometown crowd at the landmark SSE Hydro in Glasgow, The Brand New Tour - Live brings audiences in to the mind of one of the sharpest comedy talents the UK has to offer. With a career spanning 15 years Kevin Bridges already has the life experience of a man twice his age, helping him to hit the nail on the head with his shrewd outlook on the modern world. Whether musing on the current political landscape, social media, religion, hitting his thirties or his adjustment to life as a middle-class man in Glasgow's West End, Kevin delivers formidable observations in a fresh and assured performance.

The The Brand New Tour is Kevin's biggest tour to date and will see him perform at some of the UK's most prestigious venues throughout autumn 2018, including a colossal 19 night's at The SSE Hydro in Glasgow (capacity 10,500) and a sold-out seven night run at London's Hammersmith Apollo.

For nearly a decade Kevin has been a regular on our television screens. Recent notable TV appearances include; BBC One's Have I Got News For You and Would I Lie To You?, BBC Two's Mock The Week, Channel 4's 8 Out Of 10 Cats Does Countdown and The Last Leg and Sky One's A League Of Their Own.

Kevin has released three best-selling DVDs: The Story So Far - Live in Glasgow in 2010, The Story Continues in 2012 and 2015's A Whole Different Story, his biggest selling DVD to date.

BD
Finding praise from critics around the world, Boyhood, following the life of Mason, from early childhood to his arrival at college, is released on Blu-ray and 4K UHD 27th March 2023 from Arrow Films. END_OF_DOCUMENT_TOKEN_TO_BE_REPLACED
Top PicksView