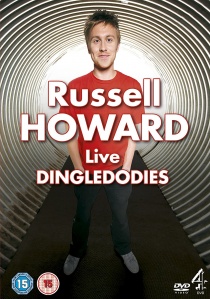 NewsStandup Comedy
News Article Go back to homepage
Recorded during the twice extended tour which sold over 120,000 tickets, Russell Howard Live - Dingledodies is released on DVD by 4DVD on 9th November 2009.
Russell Howard
Russell Howard
Russell Howard
4DVD
Unknown
09/11/2009
Thank you for supporting DVD365.net when you order using the link(s) below. As an Amazon Associate we earn from qualifying purchases
Buy DVD
Information

Recorded during the twice extended tour which sold over 120,000 tickets (including three gigs at London's Hammersmith Apollo and one at Wembley Arena), Russell Howard Live - Dingledodies will be released by 4DVD on 9th November 2009.

In the last 12 months Russell Howard has become one of the UK's most successful live comedians. His debut DVD, Russell Howard Live, was the fifth highest selling stand-up release of Christmas 2008 and has now sold in excess of 140,000 copies. This autumn will see RUSSELL front his own topical comedy show, Russell Howard's Good News, on BBC Three and embark on a 10-date nationwide arena tour.

In addition to being a regular on Mock The Week (BBC Two's highest rating comedy show, which has seen viewing figures of over 5 million per week), Russell has twice appeared on Live At The Apollo (BBC ONE) alongside some of the biggest names in comedy; and followed in the footsteps of Al Murray - The Pub Landlord to become the host of Comedy Central's Edinburgh & Beyond.